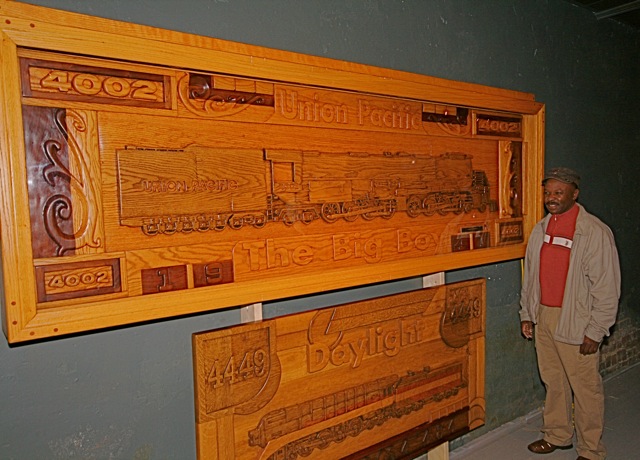 Each year Jackie Hadnot prepares a large railroad wood carving to be placed on display at the annual National Train Day in Los Angeles the second Saturday in May as well as to be previewed at Fullerton Railroad Days the first weekend in May. After these initial displays the wood carvings will sometimes go on tour to various railroad museums and events. Eventually these wood carvings find a permanent public display home at the APRHF Silver Rails Gallery in La Plata, Missouri, where several of Jackie Hadnot's works are currently on public display.

How Jackie Hadnot and the APRHF Silver Rails Gallery came together:

A few years ago a member of the APRHF (American Passenger Rail Heritage Foundation) was watching the Huell Howser California's Gold TV Show episode on Woodworkers. At the end of each segment, Huell Howser always asks each guest how viewers can purchase their works. Jackie replied that he doesn't sell his works but rather hoped they could someday be displayed in a place where they could be enjoyed by the public. That is what lead the APRHF to contact Jackie to see if he'd be willing to place his works on display at the APRHF Silver Rails Gallery, which at that time was just being constructed. Jackie thought that would be a great place to share his works with the public ans was able to bring his woodcarvings out to the gallery and to present them in person in time for the Grand Openning. (Note: Though at that time none of Jackie Hadnot's wood carvings were for sale, a few of them are now available for purchase. Click Here for more information).

Jackie Hadnot in his own words:

As an artist, I enjoy creating these wood relief carvings as well as my other forms of artistic expression. This particular series, "Wooden Ironhorses" is one of my favorites. It captures my feelings about the by-gone days of the great trains. This series is my tribute to those glory days.

I have been working on this art since my childhood. My earliest memories related to my art are that of walking along the train tracks in Sand Canyon, in the Canyon Country area of California. I was awed by the majesty of these mighty iron giants and their thunderous sounds echoed in my dreams at night. I saw the images of trains rolling down the tracks and at that moment, I wanted to carve one on wood.

I remember working on my very first piece, a little train carved out of pine. I went down to a local frame shop in Canyon Country, where I had it framed and displayed. I was so surprised when the carving sold in just 2 weeks. I was just 14 years old at the time and was hooked. The life of the artist appealed to me more than ever and I haven't looked back.

The majority of my work deals with the expression of the detail on the train. The "Ironhorse" has to have an antique look, showing off all the minute structure of the piece. My earlier pieces dealt with the whole train, but my current group of carvings is absolutely detail-oriented. I see the carving as a complete whole, even before I start putting a chisel to wood.

My biggest wish for my art is that it be available for everyone to enjoy. It thrills me to see the expression on people's faces when they look at my artwork. The compliments I get on my craftsmanship means the world to me. One of the hardest things for me to do is to part with each one of my carvings. I hope those who invest in these carvings are people who appreciate the "Wooden Ironhorses" as much as I do and will share this love with other people. Knowing that would make me happy.