How the
American Passenger Rail Heritage Foundation
and its exhibition of Amtrak history
came to be in La Plata, Missouri

The influences that eventually brought about the 501(c)(3) non-profit American Passenger Rail Heritage Foundation all started with the Amtrak Historical Society, TrainWeb.com / TrainParty.com, and the Depot Inn & Suites.

TrainWeb has a long history of supporting and promoting Amtrak going back to 1995. TrainWeb is probably most known for the travelogues and photos of rail travel that are posted to their website by their staff and correspondents who frequently travel throughout the nation by Amtrak. Every rail travelogue that has ever been posted to TrainWeb can be found in the Travel Section of TrainWeb.com and can also be accessed directly at RAILtravelogues.com. Over the years that TrainWeb has been in existence there have been hundreds of rail travelogues posted. Combined, the TrainWeb staff and correspondents have traveled more than 3 million miles by Amtrak.

For the first 9 years of TrainWeb's existence, their office was located directly above the Amtrak Ticket Office overlooking the platform at the Fullerton Amtrak Station in California, an office that years ago was used by the Santa Fe Railroad to manage express shipments and then later for dispatching operations.

For years, a number of visitors to the TrainWeb website would call and e-mail, especially parents of small children, asking where they could purchase railroad themed party supplies for their child's birthday party. The TrainWeb staff didn't know where these people could purchase such supplies other than at a local party store. But the parents would always reply that the selection at the party stores were inadequate. Thus, TrainWeb decided to try selling railroad themed party supplies online themselves and see if there was a market for it. TrainWeb set up a division and a new website, TrainParty.com, to try this new venture.

Boy, were they surprised! People started purchasing the railroad themed party supplies faster than TrainWeb's TrainParty could refill their inventory! Sales went through the roof and TrainParty could no longer hold all the inventory in their small office above the Fullerton Amtrak station. Sales continued to grow so rapidly that TrainParty realized they needed a much larger facility, both for the current volume of sales and future growth. They also realized that they needed to be more centrally located in the nation to lower shipping costs and expedite delivery time to everywhere in the nation. Thus, TrainWeb decided to move the TrainParty facility to a state that was more centrally located in the nation, such as Missouri.

Originally, TrainWeb decided to move TrainParty to Liberty, Missouri. One day TrainParty was talking to one of their customers, a new hotel in La Plata, Missouri, the "Depot Inn & Suites," that had just opened and purchased a lot of plastic train whistles from TrainParty.com to hand out to the children at their grand opening. Tom, the owner of The Depot Inn, suggested that TrainParty move to La Plata, Missouri, instead of Liberty. Tom pointed out that there was an Amtrak station right in La Plata and that the town is interested in promoting their railroad history to attract visitors.

Because of the common railroad related interests and goals of TrainWeb and the Depot Inn, and from the encouragement of the town of La Plata, and the location of a facility that we could move into right next to the BNSF mainline and route of the Amtrak Southwest Chief, TrainWeb did end up moving TrainParty and the TrainWeb LLC headquarters from Fullerton, California, to La Plata, Missouri! TrainParty moved into a building on the other side of the tracks in direct view of the Amtrak Station in La Plata. There are a number of photographs of the Amtrak La Plata Station, the new TrainWeb / TrainParty building, and the Depot Inn & Suites, which are all within walking distance of each other, at: www.trainweb.com/news/10thaniv.html

Having been formed in 1971, Amtrak was 36 years old in 2007. TrainWeb wanted to try to collect, preserve and place on disply as much memorabilia and items of Amtrak history as possible before while a lot of these items probably still existed and had not yet been destroyed or lost. Keep in mind this was in 2007, a few years before Amtrak put together their own "Amtrak History Train" in celebration of Amtrak's 40th Anniversary in 2011. Though the Amtrak History Train is still touring the nation as of 2014, the long term plans for this train including all of its valuable items of Amtrak history, are uncertain. TrainWeb wanted to establish a permanent exhibition of Amtrak history where these items would be preserved and displayed virtually forever.

Toward that end, TrainWeb acquired two ex-Amtrak Mail Handling Cars (MHC) that Amtrak had been using for the transportation of U.S.Mail. TrainWeb coordinated the placement of a segment of track next to the Depot Inn & Suites at the North Brown Street Exit off Missouri Highway 63. On Wedenesday, October 17, 2007, using cranes and trucks, the ex-Amtrak cars were moved to these tracks.

For the next several weeks, the railcars were refurbished, cleaned up, the paint touched up, steps and ramps were added, lighting and display cabinets installed, etc. Most of the collections of the Amtrak Historical Society and TrainWeb were placed on public display in these railcars. This exhibition of Amtrak history was opened to the public at 1:30 PM on Saturday, February 23, 2008 with a Grand Opening Ribbon Cutting Ceremony.

After the opening of the railcars to the public, TrainWeb and the Depot Inn & Suites realized a much larger facility would be needed to display addition items of Amtrak history, especially once items to large to fit in the railcars started to be acquired. Also considered was the establishment of a museum totally devoted to passenger rail. There are a lot of museums devloted to various railroads or regions of the nation, but no museum that is specifically devoted to preserving and promoting passenger rail heritage.

Anyone familiar with how this nation grew is aware that much of that growth, and the direction that growth took, was due to the railroads. The railroads brought hundreds of thousands of settlers to the west and cities were founded or expanded along the rail lines. The history of passenger rail and the history of America are highly integrated. TrainWeb and the Depot Inn & Suites were interested in creating a museum that could preserve and display this passenger rail history to the public.

As a result, the founders of TrainWeb and the Depot Inn & Suites helped to create a 501(c)(3) non-profit tax deductible community organization that they named the American Passenger Rail Heritage Foundation. TrainWeb donated the 2 ex-Amtrak Mail Handling Cars (MHC) along with all its Amtrak Memorabilia to the APRHF. The Amtrak Memorabilia from the Amtrak Historical Society that is on display in the railcars is on loan from them indefinitely and will remain on display in the APRHF railcars.

The APRHF is continuing to explore the creation of a larger museum facility devoted to the history of passenger rail in addition to the APRHF exhibition of Amtrak history. There is a switch and siding off the BNSF mainline near the Amtrak Station in La Plata. The APRHF founders have acquired over 40 acres of land in line with this railroad siding that could be used as the location of the new museum and railyard. These plans are currently in the conceptual stage and more information will be posted here at a later date.

If you would like to donate Amtrak memorabilia to the exhibition or contribute funds to help with the operation of the museum, please send them to: APRHF, P.O. Box 175, La Plata, MO 63549. Checks should be made out to the APRHF (or American Passenger Rail Heritage Foundation). You can also click here to donate online. APRHF is a 501(c)(3) organization so your contributions are tax deductible to the extent allowed by lax. Please consult your tax advisor for details.

The APRHF is specifically seeking Amtrak memorabilia from the 1970's plus rare and significant Amtrak items from any other year. If you own such items and would like to share these items for the enjoyment and education of the public, please contact us. We'd prefer that items be donated to APRHF rather than loaned to us. However, if you have items of Amtrak history that are particulary rare or valuable that you'd prefer to just be placed on public display rather than donating them, APRHF will consider accepting such items for public display. We ALWAYS welcome financial donations. 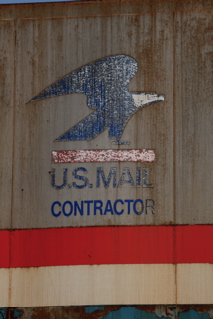 If you wish to help the efforts of the American Passenger Rail Heritage Foundation, the first thing you should do is to become a member. Click here for more information on becoming a member of the APRHF.