The Grand Opening of the Visitor Information Center located in the Depot Inn & Suites lobby, was celebrated on the 14th of July, 2011 at 2 pm. There was a really good turnout of visitors and supporters from Kirksville, Macon, and La Plata. There were refreshements available before and after the ceremony.

Maria Snodgrass, greeted everyone and welcomed us all to the Grand Opening of the Visitor's Center. She then introduced Barbara Cepinko, Secretary of the American Passenger Rail Heritaga Foundation. Barbara spoke of uniting the different attractions in our area together and showcasing them all in our Silver Rails Country map and in the Visitor's Center. This map was released within the last 3 months and it has already been well received and requested. The Visitor's Center will help to reinforce that the Depot Inn & Suites is more than a hotel, it is a "destination", where people can come to stay and do day trips, or just hang out and relax. 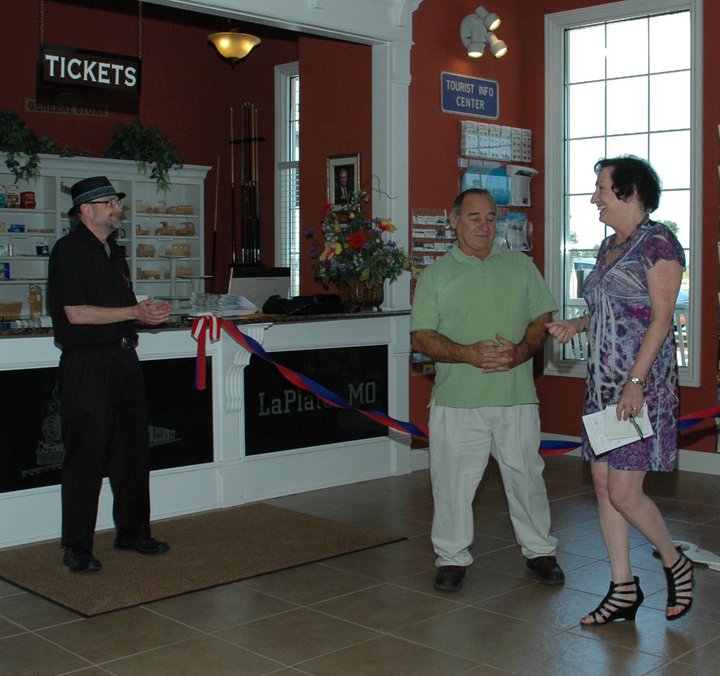 In this picture from left to right are Steve Grande, Ray Ivy and Barbara Cepinko.

The next to speak was Ray Ivy, the La Plata City Administrator, speaking on behalf of the Mayor. Mr Ivy said he is glad to see a new attraction in La Plata and wishes us much success. The ribbon cutting ceremony was done and then Kathy Adkins welcomed the Visitor's Center into the Kirksville Chamber of Commerce by presenting the first dollar certificate to Barbara Cepinko and Steve Grande. 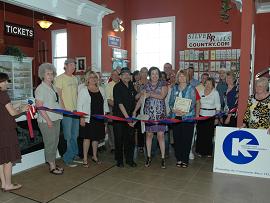 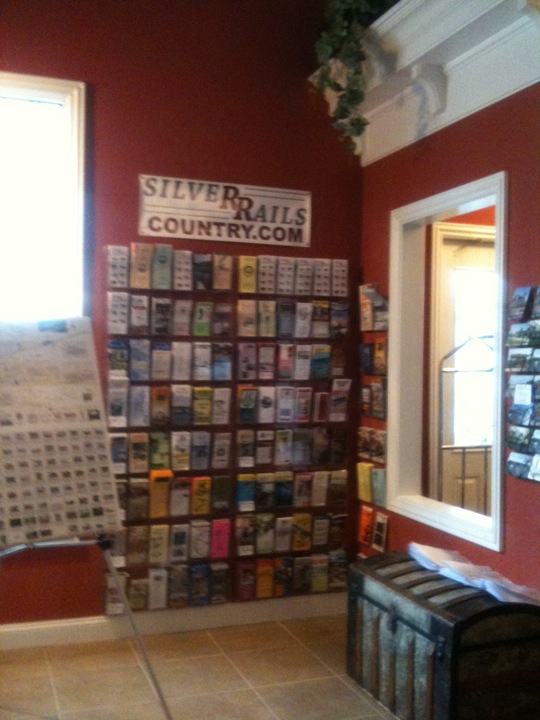 The first version of a 24" x 18" map of Silver Rails Country is currently available at venues throughout the region as well as being sent to interested tourists, travel professionals and travel publications across the nation and the globe.

In addition to being a destination for tourists and vacationers in general, Silver Rails Country is of special interest to train enthusiasts and their families. Silver Rails Country is served daily by the Amtrak Southwest Chief passenger train at the historic Santa Fe Depot in La Plata, Missouri. Railroad highlights of Silver Rails Country include the Exhibition of Amtrak History, the Silver Rails Gallery & Memorial Library, the Rail Lookout cabin & deck, the Silver Rails Event Center, the boyhood hometown museum of Walt Disney in the historic Marceline Santa Fe Depot, the Steam Locomotive & Caboose in E.P.Ripley Park, the Magic City Line Mini Train Ride, the Historic Railway Museum and Depot Park in Moberly, railroad artifacts at the Novinger Coal Miners Museum, the new dinner train in Columbia, and the Depot Inn & Suites which with its railroad theme and all its historic railroad artifacts is a small railroad museum in and of itself.

APRHF wants to promote all of the attractions in this region, especially the railroad related attractions, to train enthusiasts and their families throughout the nation and the world to come visit this area. Hence the creation of the Silver Rails Country concept.

Though people can arrive by car or fly into Kirksville, the APRHF is primarily promoting people to travel to Silver Rails Country by Amtrak into the La Plata Depot. For those unfamiliar, the Amtrak Southwest Chief provides dailey service into La Plata from Chicago from the east and Los Angeles from the west with connections throughout the nation.

Silver Rails Country includes everything within a 60 to 90 minute drive of the Amtrak La Plata Station which means La Plata, Kirksviille, Macon, Moberly, Marceline, and Hannibal among others.

Plus there are MANY American heritage attractions in Silver Rails Country not related to trains but that would be of great interest to tourists from around the nation and world in Adair, Macon and Randolph counties all promoted in the Silver Rails Country map and the website.

So far Silver Rails Country has been promoted in Trains Magazine, the Amtrak National Timetable, the Missourian, the Let's Talk Trains radio show, extensively on TrainWeb.com, and we will continue to promote it to bring in tourists from around the nation and the world to this region.

Please feel free to take copies of the Silver Rails Country Map to see all that is included in this first version. The next version will go to press in November and we welcome your suggestions.